– One of world’s top 25, “individuals, organizations and companies that are having the greatest impact on the way the Internet is changing politics,” by the World Forum on e-Democracy.

As a youngster, John Hlinko never dreamed he would one day record a Grammy-winning duet with country music legend Willie Nelson. And indeed, it never happened. But he has been long recognized as an innovator on the grassroots engagement front, received numerous awards for his work, and been covered by nearly all the major national news outlets. He has also been quoted as a grassroots expert in numerous books, and spoken at hundreds of events ranging from a few dozen attendees to a few thousand.

He is the founder of LeftAction, an activist community of more than 2 million, which has helped spur grassroots support for a range of progressive organizations and candidates.

In 2004, he was named one of the world’s top 25, “individuals, organizations and companies that are having the greatest impact on the way the Internet is changing politics,” by the World Forum on e-Democracy. And in 2006, PR Week named him as one of the top five “PR Professionals of the Year.”

John was the founder and leader of “DraftWesleyClark.com” in 2003/04, and in 2006/2007, he was the co-leader of “DraftObama.org,” a grassroots effort to build support for Senator Obama prior to his entrance into the race.

John holds a BA from Wesleyan University, and a Master of Public Policy degree from Harvard University.

1) Buy the book on Bookshop.org (supporting local bookstores) or on Amazon:  Print version or e-book version.

3) Give the book a (hopefully stellar) review 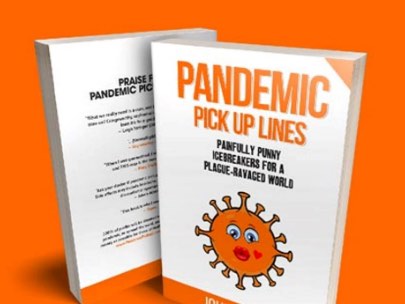 haven’t bought it. (and feel free to have fun with the review)

4) Donate directly to our first charity recipient, World Central Kitchen (José Andrés), which is currently feeding 250,000 people a day, including seniors shut in by the pandemic, kids cut off from school meals, etc.

Free sample below! Read and then go buy/review!

“You can’t spell ‘Quarantine’ without U-R-A-Q-T”

“Is that an exponential growth curve in your pocket or are you just happy to see me?”

“My love for you grows each day, like the number of total active cases when the R-naught value is higher than 1.0.”

“Roses are red, but their thorns can be OUCH-ie. You’re even sexier than Anthony Fauci”